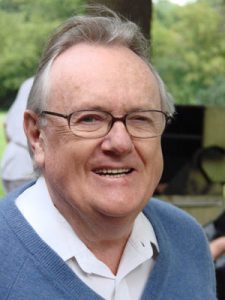 John P. Dourley died on June 22, 2018 at the age of 82. He had been in declining health in recent years but was still in practice and his death was unexpected.

John was a Roman Catholic priest, a member of the Oblates of Mary Immaculate. He was ordained in June 1964. He held Licentiates in Philosophy and Theology, from St. Paul University in Ottawa, a Masters in Theology from Ottawa University, and an M.A from St. Michael’s College, University of Toronto. In 1971 he obtained his PhD in Theology from Fordham University, NewYork. His doctoral thesis was on Paul Tillich and Bonaventure which led to an interest in Jungian psychology. In 1980 he graduated with the Diploma in Analytical Psychology from the C.G. Jung Institute in Zürich.

John taught at Carleton University until 2001 when he retired from academic teaching which left him freer to reflect and write on Jung and to expand his private practice. He was known to many throughout the world because of  his writing on Jung and religion. He was interested in the relation of the human psyche and psychology to religious experience and religions. He wrote books with intriguing titles like The Illness That We Are, On Behalf of the Mystical Fool, The Goddess Mother of the Trinity,  Love, Celibacy and the Inner Marriage to name only a few.  The books were attractive to many and challenging to others, radical as they were in the face of patriarchy and conventional theology. Like Jung, John felt compelled to write, to communicate his understanding of Jung’s message to the world. I’m bitten by this, he said, and I have to keep on writing. He was writing to the day he died.

John Dourley also lectured widely in Jungian and academic circles, addressing plenary sessions of the International Association for Analytical Psychology in Barcelona  2004, Cape Town 2007, Montreal 2010, and Copenhagen 2013. He presented at the University of Cambridge, at Yale University, and at many other meetings, in many other countries.

John had a private practice as a Jungian analyst in Ottawa, Ontario and was one of the founding analysts of the first Canadian training program for Jungian analysts, the Analyst Training Programme of the  Ontario Association of Jungian Analysts (OAJA). His analysands spoke of his  compassion, wisdom, and presence. He was always there, open and ready and focused, one said. Candidates spoke of his sensitivity and felt privileged to work with him. John was one of the outstanding in the Jungian world yet he was a humble person who took care to respect others.

On a more personal note, John Dourley enjoyed good conversation and meals with friends and colleagues. He joined local analysts in Ottawa for dinner every month and, when in Toronto for OAJA meetings, would dine with good friends such as Daryl Sharp of Inner City Books. They had known each other in adolescence and met again during training in Zurich. John also enjoyed outdoor sports. In winter during the week he went skating on the Rideau canal. Weekends he drove  “up the Gatineau” to ski.  On Fridays he often met up with Carleton University students for afternoon and evening skiing. Later, retired from teaching, when sports activities were curtailed by health, John took long walks in the city he grew up in. His childhood  neighbourhood was Sandy Hill and the family summered at the cottage at Britannia Beach. There was a photo of him about 8 years old with three other little boys sitting on the grass laughing for the camera.

In summer John loved to go fishing. His favourite watering hole was at a lake in the Gatineau Hills on land owned by his cousins. He spoke warmly of his summer fishing weekends. In a framed photo on his wall we see John Dourley wearing a jacket and hat, sitting alone in a row boat on the lake fishing on a summer’s day. This was, quite possibly, his favourite spot in the whole world, a place where he could relax, reflect, and gather himself in quiet tranquility.

Finally, one last thing. John liked cats and cats liked John. No matter at whose house, the resident cat, no matter how shy, would come to John to be stroked, and spoken to, and generally worshipped. He had a favourite photo of an orange tabby, a neighbourhood cat, he adopted and fed whenever it came round.

John Dourley was a brilliant thinker, author and theologian; a respected and valued Jungian analyst, and a dear friend to many. In Ottawa we were planning to have another analyst lunch soon. His dying was unexpected, but I think he might have preferred a swift exit, seated in his analyst chair, and I wish him Godspeed.