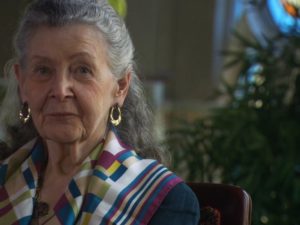 Marion Jean Woodman was born in August 1928 in London, Ontario, Canada. She died on the 9th of July 2018, a few weeks short of her 90th birthday.

Marion had a first career as a legendary and beloved high school English teacher. Through poetry, she helped to transform ‘terminal’ students into kids that went on to university.

While accompanying her husband Ross Woodman on a sabbatical in London, England in the early 70’s, she began analysis with Dr. E.A. Bennett, which later led her to begin her training at the C.G. Jung Institute.

After receiving her Diploma in 1979, Marion opened a practice in Toronto. She began writing books, publishing them with Daryl Sharp at Inner City, and they became bestsellers in the 1980’s. Her work on the feminine and on addictions helped to transform the lives of many. Marion also developed workshops based on the complementarity of body and soul, as espoused by Jung himself.

Marion was also one of the founders, along with Daryl Sharp and Fraser Boa, of The Ontario Association of Jungian Analysts (OAJA), and the recipient of three honorary Doctorates.

Marion was the older sister of Bruce and Fraser Boa. Their mother was very sickly when they were young and Marion looked after them. Her brothers meant the world to her.

Marion and Ross enjoyed a fruitful life together over many decades. Ross died in 2014 at the age of 91.

For the last several years, Marion suffered from dementia and lived in a long-term care facility very close to her home in London, Ontario.

Two weeks ago Marion sustained a bad fall and was never able to recover. She passed away peacefully with Fraser’s daughters, Marion and Shelley Boa, at her side.