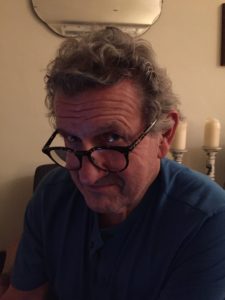 Richard Wainwright died while out walking in his beloved countryside on the afternoon of January 16th this year. He was 73. He had had major heart surgery some four years ago, but such had been his remarkable recovery and assertion of life that his sudden death came as an enormous shock to us all. He will be sorely missed by all his friends, colleagues and family. He was remembered by his colleagues with great affection and sadness at the AJA 40th Anniversary Lunch on January 22nd where members raised a glass in celebration and held a silence to mark his passing. We have lost a giant of a man.

Richard was a man of many parts. It seemed there was nothing in life which did not command his interest – from history, literature, music, art, film, theatre and poetry to politics and ecology – and of course, to his intense engagement with the workings of the human psyche in his work as a Jungian analyst. Richard lived life with passion and generosity of spirit. His range from analyst, teacher, supervisor to historian, writer, actor, poet – and not to forget, passionate music lover and lover of good food and wine, and stalwart friend – was extraordinary.

Born in 1943, an only child, who grew up in West London, he read economic history at Exeter University and went on to an M.Phil. on Mayhew’s work on London Labour and the London Poor; he also edited ‘The Victorian Working Class ‘ with Peter Razzell. His passion for a sense of historical, social and economic context, for democracy, freedom and equality never left him and informed the way he lived his life as a psychoanalyst. Not for Richard the analytic encounter as ‘ivory tower’: it was political to its core, as, indeed, was the very act of becoming an analyst!

He married Pippa in 1968 and in 1977, after his daughter Jessie’s birth, they moved to North Devon where he worked in community education and taught literature programmes. In 1979 he founded Rough Magic Theatre Company touring the South West with productions for both children and adults. Tom, his son, was born in 1980.

After the family returned to London in 1983 Richard’s passion began its turn towards psychotherapy as he trained as a psychotherapeutic counsellor at Westminster Pastoral Foundation and developed a counselling practice. During the 1980s and 1990s he also frequently trained with Enrique Pardo’s Pantheatre Company – a theatre laboratory keenly engaged with the archetypal roots of theatre practice. Then in 1990 he joined the University of Hertfordshire to teach on the MA in Dramatherapy and was a highly respected member of the faculty, both for his creative workshops and training groups and for his supervision of student placements. Of this time his colleague, Phil Jones, wrote ‘there is a legion of therapists and clients in different parts of the world who will echo Richard’s input and imprint for many, many years.’

All these experiences and passions, along with the vicissitudes of his early life, laid the foundations for the analyst he would become. He began his analytic training in London with the Association of Jungian Analysts in the early 1990s, soon making his mark as an independent thinker with the courage to go his own way and bringing the riches of his passion, empathy and knowledge to his analytic work. One of his colleagues, Shayne Spitzer, recollects how his associations could run from a T.S.Eliot poem to a Bach fugue to a memory of a Pina Bausch dance piece as he evoked what it was to be with a particular client. He chaired the AJA Training Committee from 2003 – 2005 and until 2007 acted as consultant to the new Training Committee which oversaw the start of the new two year post-graduate training. I recollect, as a committee member during his tenure as chair how, with his customary flair, he facilitated an atmosphere in which we could begin to grapple with what it means to run an analytic training in the twenty-first century, both philosophically and in terms of democratic principles.

While deeply rooted in Jungian thought (his seminars on Hillman were a revelation), he also drew heavily on the best of the psychoanalytic world through such independently-minded writers as D.W.Winnicott, Thomas Ogden, Christopher Bollas and Adam Phillips. He brought all this together in his seminars and writing – in the presentations he gave both to analytic groups in the UK and further afield (Brazil, Bulgaria, Cyprus, Slovenia and Italy to name but a few) and at various international conferences. He contributed chapters to two books: “Representation, evocation and witness: reflections on clinical scenes and styles of presentation” (in ‘Vision and Supervision ‘ ed. Dale Mathers, London, Routledge 2009) and “Learning to move: imagination and the living body” (in ‘Alchemy and Psychotherapy” ed.Dale Mathers, London, Routledge 2014). In addition, his body-based workshops at AJA Summer Schools were greatly valued with their emphasis on the physical embodiment of the psyche in all its manifestations – a challenge to the often all too mind-bound analyst!

In the last several years of his life he became particularly interested in a project with Mario Guarnieri (a dramatherapist and psychoanalytic psychotherapist working in forensic medicine) and his colleagues, who persuaded Richard to work with them on a performance art piece to evoke both the experience of working with ‘the forensic patient ‘ and of supervising such work. This was presented/performed at the International Association of Forensic Psychotherapy Conference in Venice in 2008. Richard and Mario continued to work on such presentations and gave them at various international conferences. Indeed they were due to present at the World Association of Dynamic Psychiatry in Florence in April this year. Richard was passionate about this collaboration and about how evoking the qualities and atmospheres of such encounters was key to deeper possibilities of understanding. In February 2016 we had the pleasure (and disturbance) of experiencing one of these presentations at AJA .The evening is still being talked about.This way of working brought together Richard the analyst, the supervisor, the theatre director, the actor and the enabling colleague in a wonderfully creative way.

In the last two years he had also begun a collaboration with Chris Robertson (co-founder and director of ReVision). At the 2015 ReVision Winter Conference (‘Reading the Signs, Psychotherapy and our Cultural Predicament ‘) Richard’s contribution drew on his work in Ukraine in times of revolution and explored the impact of collective dissociation. For the Climate Psychology Alliance conference (Radical Hope and Cultural Tragedy’), Richard and Chris explored the cultural dilemma facing us all that requires (in Chris’s words) ‘a diving into our brokenness…. as an essential gateway to repair’. Again, a richly creative collaboration that both Richard and Chris were looking forward to developing further in the future.

However the project that he particularly gave his heart to in these last years was his work with the Developing Group in Ukraine. From 2008 he combined this with his analytic practice, travelling to Kyiv between four and six times a year. He was an inspired teacher and had a way of listening that enabled people to hear what they were saying in the deeper reaches of themselves. He was also politically shrewd and could help the Ukrainians see how they needed to develop if they were to become a fully functioning group in their own right. In Antonia Boll’s words ‘he was their champion, empowering them to win important concessions around the integrity of their training programme when it was threatened by bureaucracy. He was passionate in his support of a people who were struggling to emerge from the grip of the old Soviet empire, a rigid regime that punished independent thinking and rewarded passive acceptance of authority.’

He had a deep affection for the people in the Kyiv Developing Group – and they for him. And he stayed with them through revolution, war and crisis, going with them to the Maidan at the height of the demonstrations that brought about the fall of a corrupt government. He wrote very movingly about these experiences and how they had changed his understandings in his paper ‘Analytical Work In Time of War’, a paper he presented at the Rome Congress. He presented this at AJA in March  2014 and was to have presented it at the SAP in February this year. He had so much to say and had intended to develop these thoughts into a book but this work will now never be completed.

Richard became IAAP Liaison Person for the Kyiv Developing Group in 2016 and had hoped to stay with them until 2019 when their next group of fully ‘home-grown’ analysts will qualify. Alas, that was not to be. The loss to the Ukrainians is immeasurable. The shock, grief, gratitude, esteem, and above all, love which comes through in the tributes from members of the group brings tears to my eyes as I write. Here are some of those tributes: ‘with much love and respect in my heart ‘; ‘a warm soul ‘; ‘My God! It looks like an angel took him away! This is the interrupted flight’. And from Elena Liulina ‘He was so dedicated to his work with our group, to every one of us, and was so touchingly passionate about Ukraine.’ And from Dara Pokhylevych: ‘A man with such a big heart. He was our friend. Our group, the way it looks now is due to Richard. He changed the flow of our lives.’

Dara speaks for us all. Richard changed the flow of our lives for all those of us fortunate enough to come into contact with him. To count him a friend was an honour and a great gift.Time and again, when talking to people about Richard, the words they use are: generous, big-hearted, inspired, innovative, creative, a true artistic and ideas companion, a person with a lust for life, a real friend. He could, of course, be cussed, brusque and awkward – he was after all human – and that was the joy of him, his integrity. He was an extraordinary person, who never ceased to hold onto hope in life, even at times of great frailty and also in our present darkening world. He died in nature, which was his element. His courageous spirit and dynamic creative presence will be a continuing legacy in our lives. To quote Daria once more: ‘He will stay in our hearts forever.’

Our thoughts are with his beloved family, Pippa, Jess and Tom, and with his grandchildren, Molly May, Wilf and Joe all of whom he adored and was devoted to.