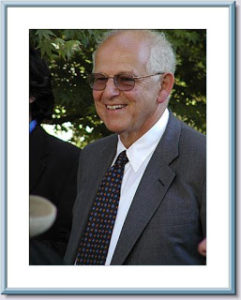 The International Jungian community has lost a great friend and leader with the death of Thomas B. Kirsch.  Tom carried the legacy of Jungian psychology from the time of his birth throughout his long and productive life. His parents James and Hilde Kirsch were two well-known analysts who co-founded the C. G. Jung institute of Los Angeles along with the Max and Lori Zeller after fleeing the Nazis. In addition, Tom was married to Jungian analyst Jean Kirsch and they had celebrated the 50th anniversary of their first meeting just shortly before his death. He is survived by Jean, his son David Kirsch of Chevy Chase, MD and Susannah Kirsch Kutz of San Francisco, and 5 grandchildren.

After medical school at Yale University, Tom moved to Palo Alto for his residency in psychiatry at Stanford University and to begin training as a Jungian analyst at the C. G. Jung Institute of San Francisco.  His lifelong relationship with the iconic San Francisco analyst Joe Henderson began at that time and remained intact until Joe’s death in 2007 when Joe was a remarkable 104 years old.  After completing training, Tom gradually entered the world of Jungian politics, becoming President of the Institute in San Francisco from 1976 to 1978.  Before long, he was elected to the IAAP Executive Committee and gradually moved up to become the last two-term president from 1989 to 1995.  This was a time fraught with political and social changes, including the destruction of the Berlin Wall and the dissolution of the USSR.  In the wake of these momentous events, Tom’s leadership was key in responding to requests from Russia and throughout Eastern Europe for Jungian education and training.  A gregarious, extroverted man, Tom began to travel the world as requests for education and training multiplied.  His travels took him not only to Russia and Eastern Europe but to numerous continents and countries where Jungian psychology was just emerging.  He helped many people to finish their analytic training and to found societies along with playing an important role in launching the Developing Group program initially led by Renos Papadopoulos.

Having lived a truly Jungian life, Tom was a great storyteller with an enormous number of tales about the Jungian community.  He seemed to have known just about everyone!   His book The Jungians (2000) is indeed a unique social history of the Jungian community; he had a remarkable memory for oral history and we are fortunate that in his later years he set about writing down his memories.   Tom avidly read history with scholarly intensity but also as a lived discipline.  Being Jewish, he was intensely interested and concerned about Jung, his thought and his reputation regarding allegation of anti-Semitism.  Although never one to whitewash Jung’s statements and writings, he was often a staunch defender of Jung in psychoanalytic circles—Tom always relied on the facts to make his case, which he did with passion.  As a young man, Tom had the opportunity to meet and speak with Jung on several occasions, once for an analytic session.  He also oversaw the publication of the correspondence between his father and Jung, in which many issues of vital concern were discussed, including some of Jung’s essays deemed as anti-Semitic.  Tom’s open, honest approach to his own family’s part in Jungian history was inspiring to many people.

After completing his terms as President of the IAAP, Tom continued to be active in the international community.  He and Jean often hosted international students at the Jung Institute of San Francisco, many of whom have gone on to become analysts and bring Jungian psychology back to their home countries.  As one example, through these activities he helped launch a series of conferences on Chinese Culture and Jungian Psychology, which are still going on (the next will be in April 2018 in Xian, China).  He served as the Liaison Person for the IAAP’s Developing Group in Taiwan until his health no longer allowed extended travel on a regular basis.  After finishing his tenure with the IAAP, Tom was a frequent, sought-after lecturer throughout the world; he persisted with a remarkable pace writing numerous articles and publishing several books that carried the signature of an inviting story-teller.

Tom was also a generous mentor, especially on historical and political matters associated with the IAAP.  Personally, my connection with him began at the first of the Journal of Analytical Psychology conferences in Maine.  As I moved into the role of US Editor, we worked together to put on a series of conferences on historical themes in the Jungian community.  These were held in San Francisco and co-sponsored by the Journal (JAP).  His mentorship evolved into a personal friendship and together with Jean and my wife Linda, we often traveled and spent leisure time together.  Our lives were profoundly enriched by shared adventures and I’m grateful to have had such a steadfast companion and friend.  My story is not unique in this regard; many of those with whom Tom engaged over the years can bear testimony to similar experiences of loving friendship.  He will be deeply missed. 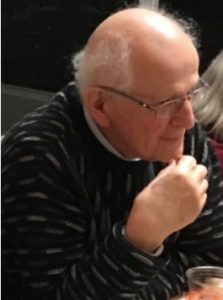 On Behalf of the C. G. Jung Institute of San Francisco

Dr. Thomas Kirsch passed away peacefully at his home in Palo Alto with his family members at his side on October 22, 2017.  Dr. Kirsch was born in London on June 14, 1936 and his birth was celebrated by a congratulatory note from C.G. Jung to his parents, Hilde and James Kirsch, both of whom had become Jungian analysts following their initial analytic work with Jung.  Tom liked to joke that he was born “into the family business” and the truth is that he did work “in the family business” as a Jungian analyst all his adult life.

The Kirsch family moved to Los Angeles in 1940 when Tom was four years old.  James and Hilde became founding members of the C.G. Jung Institute of Los Angeles.   As both of Tom’s parents were German Jews, Tom inherited from them not only the Jungian tradition of psychoanalysis but also the complicated history of Jung and Jewish people.  For most of his life, Tom carried with great integrity the burden of being an interpreter of that history to Jungians and Freudians alike.

Tom was truly a man for all seasons and, in addition to being immersed in the rich cultural history of Europe through his parents, he developed his own deep connection to being an American in his Los Angeles upbringing.  He loved sports and was an avid tennis player until a back injury ended his tennis playing days.  He loved to swim and did so throughout his life.   He was a devoted sports fan, with the San Francisco Giants baseball team bringing him great joy.  Tom was also steeped in classical music and was meticulous in his choice of the very best music and the very best equipment for playing it.

Tom left Los Angeles at the age of 17 to attend Reed College and then went on to graduate from Yale Medical School in 1961.  He took a psychiatric residency at Stanford University.  Along the way, he was warned that pursuing training as a Jungian analyst would be a kind of professional suicide as the Jungian tradition was small and poorly understood at the time of his training.  This warning did not stop Dr. Kirsch from completing his training at the C.G. Jung Institute of San Francisco in 1968 or from developing a long and deeply influential relationship with Dr. Joseph Henderson, a dean of the San Francisco Jungian community.

In 1977 Dr.Kirsch joined the Executive Committee of the International Association of Analytical Psychology and served as its President from 1989-1995.  As IAAP President Dr. Kirsch furthered the development of a consistent attention to professional ethics, including the formulation of a written ethics code on the part of each of the member groups of the IAAP.  Both during and after his tenure as President, Dr. Kirsch traveled the world tirelessly as an elder statesman of Analytical Psychology which flourished under his leadership with the formation and development of Jungian organizations in Taiwan, China, Brazil, South Africa, Australia, Mexico, Russia, and elsewhere.

At the same time, Dr. Kirsch maintained an active clinical practice which was the foundation of his professional life. In his long and productive career, he wrote some 100 articles and books, including The Jungians, the definitive history of the world wide development of the Jungian tradition, and a fine, intimate autobiography, A Jungian Life.  In 2017, Dr. Kirsch’s lifetime contributions were honored in a Routledge Selected Works Volume of his theoretical contributions:  Jungian Analysis, Depth Psychology and Soul. As if in fulfilment of his destiny, a superb, numinous interview of Dr. Kirsch by Murray Stein was filmed in Jung’s library at Bollingen by Luis Moris and is available through Chiron Publications.  Dr. Kirsch’s study of the history of Jungian psychoanalysis began as an avocation and became over time a rich, scholarly pursuit.

What served Dr. Kirsch well as an analyst, a statesman, a family man, and a deep and loyal friend to many colleagues was his incredibly finely tuned feeling which was a trustworthy measure of the meaning and value of whatever the issue might be.  Tom Kirsch lived a large and full life with travel, professional engagements, a love of music, sports, spy novels  and deep friendships around the world.  In the midst of such expansive energies, he remained fundamentally modest, curious, open, and acutely discriminating in his many relationships to the world—inner and outer.  He is survived by his beloved wife, Dr. Jean Kirsch who is also a Jungian analyst, a sister Ruth Kirsch Walsh, his son David, his daughter Susannah Kirsch-Kutz, and 5 grandchildren: Jacob and Isabel Kirsch, Hilde, Jasper, and Theia Kirsch Kutz.

Gifts in memory of Dr. Kirsch can be contributed to

It’s a very happy conclusion to Tom’s life which was devoted both to advancing Jungian psychology and recording its history that Tom himself has become an indelible part of that history.